Seeing the Exceptional in the Unexceptional: Reconstructing the Josephinum Bible 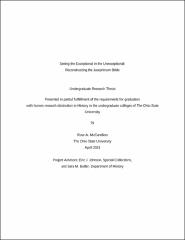 The Josephinum Bible is a fragmented thirteenth-century Bible manuscript, and one 73-leaf portion of the manuscript has lain relatively unnoticed at the Pontifical College Josephinum in Columbus, Ohio for over 20 years. The Josephinum Bible has undergone many forms of destruction and fragmentation: first, in the dispersal of a medieval library; second, in the removal and replacement of many of the manuscript's illuminated initials; third, in the deliberate commercial breaking of the manuscript into individual folios. This essay traces the codicology, provenance, and fragmentation of this seemingly unremarkable manuscript, revealing a variety of ways in which people have thought about and handled manuscripts throughout the centuries. Additionally, this study traces fifty additional leaves of the original codex, identifying some provenance and/or their current whereabouts. The Josephinum Bible appears, at first glance, to be a relatively unimportant manuscript, but in its fragmented state it provides great insight into what can be learned and reconstructed from such broken books.