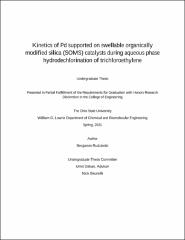 The past few decades have seen a rise in concern regarding environmental issues prompting many areas of research to find efficient means of breaking down hazardous chemicals used in manufacturing and industrial centers. One such hazardous chemical, trichloroethylene (TCE) has been a major concern due to its toxicity and pollution of drinking water sources such as groundwater. Currently, hydrodechlorination (HDC) over noble metal-based catalysts is employed in the conversion of TCE into benign products, such as ethane. However, in addition to producing ethane, this conversion of TCE molecules also produces hydrochloric acid (HCl) as a byproduct, which is known to deactivate noble metal catalysts. In order to circumvent this issue, our group has been exploring a novel catalyst support known as SOMS (swellable organically modified silica) which prevents deactivation of noble metal sites by HCl due to its hydrophobicity and swellability. While kinetics for the HDC of TCE has been established in literature for many conventional supports prior, only recently have the kinetics of the HDC of TCE been explored for animated supports such as SOMS. However, the effect of particle size of noble metal particles embedded within SOMS on the HDC of TCE has not yet been explored. This research project investigates the effect of size of palladium (Pd) nanoparticle sites embedded within the SOMS matrix on the kinetics of the HDC of TCE.