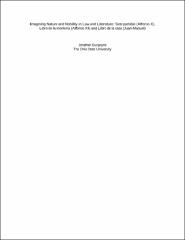 The medieval hunt and hunting manuals have been studied by historians as sources for the history of medieval science and geography, and for their insights into the daily lives of the elite societies that practiced hunting as a ritualized sport. This article examines two medieval hunting manuals, Juan Manuel’s Libro de la caza, and the Libro de la montería, commissioned by King Alfonso XI of Castile, and King Alfonso X’s law code, the Siete partidas, for their rhetorical and ideological portrayals of hunting and falconry as expressions of aristocratic power and sovereignty over the natural world. The article concludes with a study of an imagined debate between the merits of falconry and hunting with hounds in the Libro de la caza and Libro de la montería that sheds light on Juan Manuel and Alfonso’s competing views on nobility, informed by the political history of war and rebellion that shaped the lives of both men.