Do Firefighters and Police Officers in the State of Ohio Have a Higher Incidence of Certain Cancer Types Compared to the General Population? 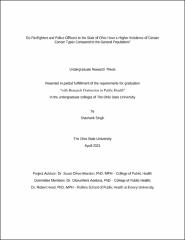