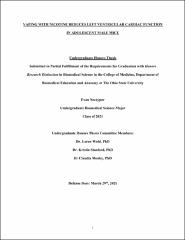 Electronic cigarettes (ECs) are the most commonly used tobacco product by teens and young adults. The aim of this study was to determine the potential effects of EC exposure on cardiac health in adolescent mice. Four-week-old FVB mice were exposed to EC vapor with 20.2 mg/mL of nicotine or vehicle alone for either 3 weeks or 3 months. Mice were exposed to HEPA- filtered air as a control (FA). Body weight was significantly reduced in mice exposed to EC vapor with nicotine versus mice exposed to the EC vehicle or to the FA control. Echocardiography revealed that male, adolescent mice displayed reductions in fractional shortening and impaired diastolic function after exposure to EC with nicotine, but not in response to vehicle alone. RT- qPCR demonstrated that EC exposure with nicotine caused an increase in left-ventricular COL1A1, and COL3A1 expression after 3 weeks of exposure, but this was reversed after 3 months of exposure. Trichrome staining showed increased vascular fibrosis following exposure to the EC vehicle for 3 months. Male mice exposed to EC vapor with nicotine had elevated serum concentrations of 3 inflammatory cytokines and 2 growth factors. While serum nicotine concentrations in male and female mice exposed to EC with nicotine were similar, concentrations of multiple metabolites were significantly lower in females. Further, the 3- hydroxycotinine/cotinine metabolite ratio, a measure of enzymatic nicotine metabolism (CYP2A5 activity), was significantly higher in females vs males. Further RT-qPCR targeting liver Cyp2A5 also showed increased expression in females vs males, suggesting a more rapid rate of enzymatic nicotine metabolism in females. These results heighten the concern for the dangers of EC use, specifically in youth, and call for further work detailing the mechanistic contributions to the observed reduction in cardiac function. The novel results of this study demonstrate that EC vapor exposure with nicotine can reduce cardiac function in developing male mice.

Project was supported by a grant from the National Institutes of Health (1R01HL139348-01) to Loren E. Wold.