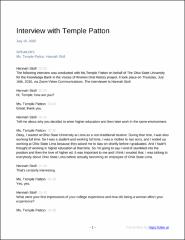 Temple Patton attended the Ohio State University-Lima campus as a non-traditional student who was also working full-time and raising two sons. She was the first person in her family to graduate from college. After graduating, she began work at Ohio State-Lima in 2002, in the Office of Admissions, and she has worked for Ohio State ever since. She first helped recruit prospective students of color, then developed the D.R.E.A.M. Scholarship Program, which provides financial support to first-generation and non-traditional college students. She now serves as the Associate Director of Diversity and Inclusion for Lima campus, and she also serves as the co-chair of the Diversity Committee and as the Coordinator of the Business Management Program. In 2018, she earned a Master's degree in Public Policy and Management from the John Glenn College of Public Affairs, commuting to Columbus from Lima. Patton discusses the pros and cons of a regional campus, equity issues at OSU-Lima, including wage discrepancies, and a lack of representation at Ohio State of women of color in higher leadership roles.