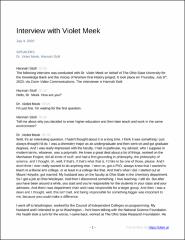 After receiving her Ph.D. in Chemistry from the University of Illinois, Violet Meek taught at Mount Holyoke College. There, she met her husband, Devon Meek, who ended up on the Ohio State University Department of Chemistry faculty. After moving to Columbus, she taught at Ohio Wesleyan University, where was promoted to department chair, then eventually appointed Dean. In 1986, she became associate director of sponsored programs for the Ohio State University Research Foundation and during that time, she was asked for serve as interim dean of Ohio State University-Lima. In 1991, she was appointed Dean of that campus and retired in 2003. During her tenure at Lima, she worked to increase the number of four-year programs, advocated for Ohio State's mission as a land-grant university and pushed for more resources to be allocated to regional campuses. After retirement, Meek became a Lutheran pastor and serves in that role for smaller congregations on an ad-hoc basis.