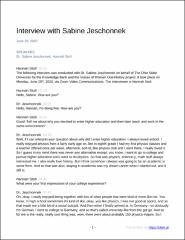 A native of Germany, Sabine Jeschonnek arrived at the Ohio State-Lima in 2001 as an assistant professor of Physics. She was promoted to full professor in 2011. Jeschonnek discusses her research on nuclear theory, her involvement in the creation of a new degree – engineering technology – at Ohio State-Lima and her non-academic roles as University Senator and a faculty leader for the student organization, Girls Who Code. She describes imbalances and differences in treatment in academia based on gender, and she talks about the importance of increasing the number of women in STEM fields. She also discusses her advocacy efforts for the regional campuses.