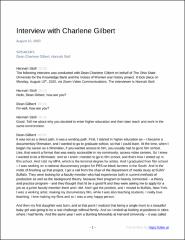 Charlene Gilbert attended Yale University as an undergraduate, and she discovered her interest in visual storytelling when she met a documentary filmmaker during an internship. She went to film school and earned a Master of Fine Arts. After graduating she created Homecoming, a PBS documentary about African-American farmers, and she taught in the Department of Media Study at the State University of New York (SUNY) Buffalo. She won a fellowship at Harvard University, then gained tenure at American University. Her first administrative role was at the University of Toledo, chairing the Department of Women's and Gender Studies and serving as the founding director of Interdisciplinary Studies. She then served as the Dean and Director of Ohio State Lima for three years, from 2014 to 2017. Gilbert recalls her work in this role as both challenging and rewarding, and she shares her passions about advocating for diversity, the students, and the Lima community.