Characterizing the Role of Novel FGFR2 Alterations in Cholangiocarcinoma 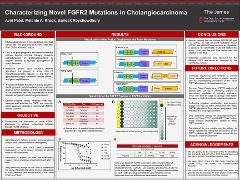 Affecting approximately 8,000 individuals annually, intrahepatic cholangiocarcinoma is an aggressive bile duct cancer that has a poor prognosis and slim survival rate. Alterations in the fibroblast growth factor receptor (FGFR), such as gene fusions, single nucleotide variants (SNVs), and gene amplifications, have been found to play a role in the oncogenic evolution of ~20% of cholangiocarcinoma patients. In order to develop more effective treatment options for these patients, further characterization of FGFR alterations is necessary. The Rapid Research Autopsy Program developed in the Roychowdhury Lab allows patients presenting with metastatic cholangiocarcinoma to consent to allow our team to perform a rapid autopsy upon passing. Multiple different tumors are then extracted, sequenced, and further researched in our lab. Using the rapid research autopsy program as a resource, this project aims to characterize the sensitivity of novel FGFR alterations to diverse FGFR inhibitors, some of which are selective FGFR2 inhibitors and some of which are nonselective FGFR inhibitors. CellTiter viability assays were utilized to determine the effect of different dosages of FGFR inhibitors infigratinib, ponatinib, AZD4547, erdafitinib, pemigatinib, Debio1347, and Tas120 on cells harboring various FGFR alterations. Cell viability was determined 72 hours after dosage, and a cell viability curve was built for each vector and drug combination. IC₅₀ values, or the concentration at which 50% of a drug's maximal inhibitory effect occurs, will be calculated. Differential sensitivity of FGFR inhibition to different FGFR alterations was observed in both 293T cells (human embryonic kidney cells) and NIH3T3 cells (murine embryonic fibroblast cells). Results revealed distinct IC₅₀ values for each vector and drug combination. Future directions regarding these findings include repetition of drug sensitivity experiments in patient-derived cholangiocarcinoma cell lines as well as translational studies in animal models to ensure validity in both in vitro and in vivo. Understanding how these FGFR alterations respond differently to current FGFR targeted therapy inhibitors can play an integral role in allowing clinicians to determine which treatments will elicit the most effective response, thus translating these results into tangible treatment plans for cholangiocarcinoma patients across the globe.