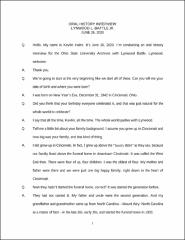 A Cincinnati native, Lynwood Battle attended Ohio State in the early 1960s, living in and serving as a resident advisor of Baker Hall. He also was president of the Omega Psi Phi fraternity. He discusses being the first Black member to dot the "i" during the Script Ohio formation by the Ohio State University Marching Band, and serving as the drum major for the University's Military Band. After graduating as a commissioned officer through the University's ROTC program, Battle later served in Vietnam, where he earned two Bronze Star Medals. He then returned to Cincinnati to work in the family's funeral home business. He also worked at Procter and Gamble for three decades, helping to increase minority representation as the Affirmative Action Manager and later as the Manager of Global Diversity. Finally, he discusses his appreciation for the support and mentorship he has received throughout his life, and he is grateful to have his legacy contribute to the university he'll always love.