Interview of Jules B. LaPidus by Bob Buerki 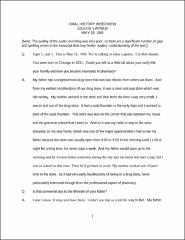 Jules LaPidus describes his career at Ohio State, which spanned nearly three decades. After receiving his bachelor's degree in pharmacy from the University of Illinois and master's and doctoral degrees in medicinal chemistry from the University of Wisconsin, he joined the Ohio State University College of Pharmacy faculty in 1958 as an assistant professor of medicinal chemistry. He was named a full professor in 1967. In 1972, he was named associate dean for research in Ohio State's Graduate School and, in 1974, he became dean of the Graduate School and vice provost for research. In 1984 he became president of the Washington, D.C.-based Council of Graduate Schools, a position he held until 2000 when he retired. In addition to his career, LaPidus describes his relationships with various Ohio State faculty and administrators he worked with in his various positions at the University.

Interview conducted at The Ohio State University Archives, Columbus, Ohio.
Note: The quality of the audio recording was very poor, so there are a significant number of gaps and spelling errors in the transcript that may hinder readers' understanding of the text.