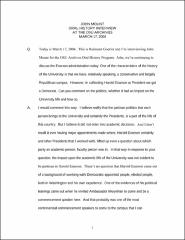 John Mount, former Dean of the University College and Vice President of the Regional Campuses, discusses his time at Ohio State, which began 1937 when he arrived on campus as a freshman. He earned a degree from the College of Agriculture in 1941 and accepted a job with OSU's Agricultural Extension Service immediately after graduation. After serving in the U.S. Navy during World War II, he returned to the Extension Service. He left again briefly to earn a master's degree from the University of Wisconsin, then returned to OSU in 1949. In his career at the University, which spanned nearly 70 decades, he held nearly every position possible within the College of Agriculture and the University Administration. He discusses these roles and the various administrations in which he served. He also discusses the creation of University College, the student demonstrations of 1970, the physical changes to campus and other topics.