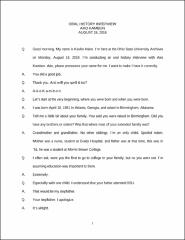 Ako Kambon describes his time as a student at Ohio State from 1969-1973. He recalls his first impressions of campus when he was a freshman, particularly the scarcity of other African-American students and the lack of services for students of color who were new to campus. This first experience helped lead to his later involvement in creating the Afro-Am Society, an activist organization furthering rights of Black students on campus. As leader of the organization, Kambon presented a list of demands to the Administration in 1970 to improve conditions on campus for Black students. After several charged meetings, Kambon was expelled for one academic year under the University's disruption rule. (Kambon's name at the time was Jerry Roberts.) He returned after his expulsion to finish his degree, and after college, he was involved in local politics. He eventually founded the Visionary Leaders Institute (VLI), which began through his leadership of the state Commission on African American Males. Through VLI, he consults primarily with K-12 educational institutions on how to promote excellence in students.