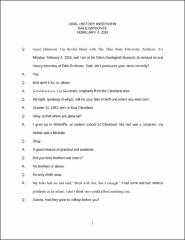 Dale Gnidovec discusses his career as Collections Manager and Curator of the Orton Geological Museum. He was hired as a collections manager for the Orton Geological Museum in 1989, but his duties expanded rapidly to include outside talks and tours of the museum. In addition, Gnidovec has made a number of trips over the years to Montana to do field research in the summer, and he teaches an Earth Science class every spring. Along with these topics, Gnidovec also discusses a break-in in 2012 at the museum that caused a significant amount of damage; a major fund-raising project in 2018 to place a full-size replica of a dinosaur in the vestibule of Orton Hall, just outside the museum; and some of his favorite memories of his three decades of work at Ohio State.