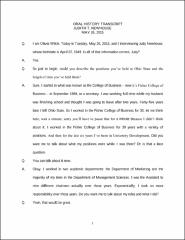 Judith T. Newhouse describes her 45-year career at Ohio State, starting as a secretary in 1969 in the Fisher College of Business. She served in a number of roles in the College, including as assistant to nine different department chairmen. Her last roughly half dozen years at the college were spent as a program manager in its Office of International Programs. She then transferred to the University's Office of Development, beginning her time there in its stewardship program for high-end donors and ending her time there in its events office. She discusses various changes in the College, including how women were viewed, particularly faculty members. She also discusses her own efforts to further change for staff members at the College, including her role as the first staff member to serve on its Dean's Advisory Council.