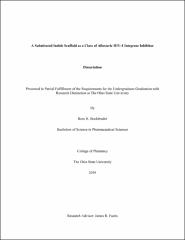 Although a number of drugs have been developed and approved to combat HIV over the past 40 years, mutations of the virus and its protein targets have necessitated the continued discovery and design of even more novel compounds today. In the Fuchs lab, we are approaching this problem by targeting an allosteric binding site on HIV-1 integrase, an integral enzyme that is responsible for integrating the viral genome into the host's DNA. This allosteric site is the same binding site as that used by the cofactor LEDGF/p75, a host cell protein that promotes the activity of integrase. Binding of small molecule drugs at this allosteric binding site along the CCD dimer interface of integrase results in the inactivation of the protein due to the formation of aberrant integrase multimers. This hyper-multimerization occurs as a result of interaction of the CTD subunit of another integrase protein with the CCD dimer interface. We are currently synthesizing new inhibitors based on a well-studied quinoline core scaffold and scaffold hoping to an indole core scaffold. The indole core scaffold was chosen due to the existence of well-established synthetic routes and the ease of functionalization of the indole core. In addition, the tilt of aromatic ring in the allosteric binding pocket has been hypothesized to improve binding of the compounds in the presence of known mutations, namely the A128T mutation. Inhibitors of this type are also structurally unique and may lead to the development of new intellectual property. The ultimate goal of these studies is to develop compounds with greater intregrase inhibitory activity through binding to the LEDGF/p75 site than previously studied compounds by optimizing functional groups around the indole core.