How do algal and sedimentary turbidity affect the swimming performance of Emerald Shiner and Golden Shiner in Lake Erie? 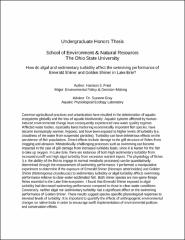 Common agricultural practices and urbanization have resulted in the deterioration of aquatic ecosystems globally and the loss of aquatic biodiversity. Aquatic systems affected by human-induced environmental change have consequently experienced new water quality regimes. Affected water bodies, especially lakes harboring economically important fish species, have become increasingly warmer, hypoxic, and have been exposed to higher levels of turbidity (i.e. cloudiness of the water from suspended particles). Turbidity can have deleterious effects on the persistence of fish populations. Direct effects include damage to the gill structure of fishes from clogging and abrasion. Metabolically-challenging processes such as swimming can become impacted in the case of gill damage from increased turbidity loads, since it is harder for the fish to take up oxygen. In Lake Erie, there are instances of both high sedimentary turbidity from increased runoff and high algal turbidity from excessive nutrient inputs. The physiology of fishes (i.e. the ability of the fish to engage in normal metabolic processes) can be quantitatively determined through the measurement of swimming performance. I performed a manipulative experiment to determine if the exposure of Emerald Shiner (Notropis atherinoides) and Golden Shiner (Notemigonus crysoleucas) to sedimentary turbidity or algal turbidity affects swimming performance relative to clear-water-acclimated fish. Both shiner species are non-game forage fishes essential to the Lake Erie ecosystem. I found that Emerald Shiner exposed to algal turbidity had decreased swimming performance compared to those in clear-water conditions. Conversely, neither algal nor sedimentary turbidity had a significant effect on the swimming performance of Golden Shiner. These results suggest species-specific physiological responses to elevated levels of turbidity. It is important to quantify the effects of anthropogenic environmental changes on native biota in order to encourage swift implementation of environmental policies and conservation efforts.