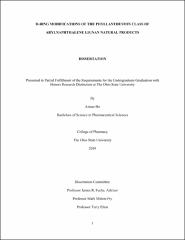 Natural products isolated from plants of the Phyllanthus genus, specifically members of the arylnaphthalene subclass of lignan lactones, show promise as a potential treatment option for ovarian cancer. These compounds are worth examining further because several structurally related synthetic analogues have displayed highly potent cytotoxic activities against ovarian cancer cell lines in the nanomolar range. Our lead compound, PHY34, exerts its cytotoxic effects by inhibiting autophagy in ovarian cancer cells which is followed by apoptotic cell death. Potent experimental agents with attractive mechanisms of action, including autophagy modulators, are needed to continue to fight cancer, potentially overcoming the problem of chemoresistance and increasing the chances of survival for patients. In order to further assess and obtain structure-activity relationship data for this class of compounds, several new analogues were synthesized by modifying the D-ring on the diphyllin core of the phyllanthusmins. The diphyllin precursors, representing the core ring system, were synthesized using a five-step method with 3,4-dimethoxybenzaldehyde as the precursor. At that stage, the sugar moiety could then put on at the C7 position to complete the synthesis of the derivatives. A total of six analogues with D-ring modifications were made, and characterization data was collected for both the diester and diphyllin precursors to confirm the structural assignments. This included collection of both proton and carbon NMR spectra for each compound for a total of twelve proton NMR spectras and twelve carbon NMR spectras as well as the determination of their accurate masses using mass spectrometry. Biological data for four of these compounds were also obtained to assess their potency against two ovarian cancer cell lines.