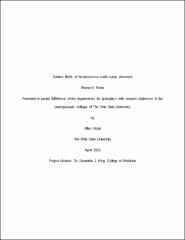 Streptococcus oralis is an oral commensal bacterium and a leading cause of sub-acute infective endocarditis (IE). Little is known of the mechanisms by which this bacterium colonizes the oral cavity and causes sub-acute IE. A crucial step in both processes is adhesion to host surfaces, yet no adhesion mechanisms have been defined for S. oralis subsp. dentisani. Electron microscopy images of S. oralis subsp. dentisani endocarditis isolates identified dense mono-lateral fibrils. Other streptococcal species have been shown to bind oral and IE relevant host surfaces, including oral epithelial cells, saliva and platelets, via serine-rich repeat proteins (SRRPs), a family of bacterial adhesins which typically form fine fibrils evenly distributed over the bacterial surface. However, S. cristatus has dense mono-lateral fibrils associated with an SRRP. This led to the hypothesis that S. oralis subsp. dentisani encodes one or more SRRPs that produce mono-lateral fibrils and act as adhesins. Analysis of a genome sequenced S. oralis subsp. dentisani isolate revealed three genes encoding putative SRRPs. A panel of SRRP mutants was generated and showed that each putative SRRP locus produces mono-lateral fibrils. The secondary structures of SRRPs are composed of two serine-repeat regions flanking a non-repeat region (NRR). Receptors for members of the SRRP family differ based on domains within the NRR. Structural predictions of the NRR suggest that two of these SRRPs, FapA and FapB, play a role in biofilm formation and intra- and interspecies interactions. Initial experiments suggest that FapA and FapB contribute to the auto-aggregation of this isolate. The FapC NRR contains predicted domains previously shown to bind sialic acid in other SRRPs. FapC mutants showed a significant reduction in adherence to saliva, which is heavily sialylated, suggesting FapC is required for efficient binding to sialic acid. FapC is the first adhesin described for S. oralis subsp. dentisani.