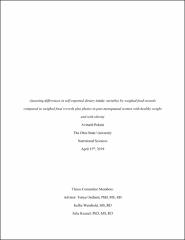 Background: Accurately assessing dietary intake is challenging. Photographic records may improve accuracy of dietary assessment, but evidence in older populations is limited. This research examined differences between dietary intake assessed using a weighed food record (WFR) versus a WFR plus photo record. Objective/Hypothesis: Determine if there is an added benefit to having participants provide photographic evidence of food intake along with a self-reported written weighed food record. Methods: Two days of WFRs with photos were collected from 15 postmenopausal women with BMI 18.5-24.9 kg/m2 and 15 with BMI ≥30 kg/m2. Two different researchers entered data into nutritional analysis software; one used WFRs with photos and one used the same WFRs without photos. Descriptive statistics and t-tests were used to evaluate differences between dietary assessment methods for nutrients of interest on day 1 and day 2 in all participants and by weight category. Results: Mean (SD) energy and added sugar intake on day 1 was 1822(607) kcal and 53.6(57.9)g respectively when estimated using WFRs without photos, and 1615(489) kcal and 40.5(28.9)g respectively when using WFRs with photos. Dietary assessment using WFRs alone tended to show greater intake for nutrients of interest; however, there were no statistically significant differences between dietary assessment methods for any variables tested (all p>0.05). Similarly, dietary assessment method did not result in significant differences (all p>0.05) in estimated intake of nutrients within weight categories (i.e. in women with healthy weight and women with obesity). Conclusions: Photographic records did not significantly change estimation of nutrient consumption in this sample of postmenopausal women. Therefore, eliminating photo records when assessing dietary intake of older women using WFRs may reduce subject burden without sacrificing accuracy. Additional research is needed to determine the utility of photos when less rigorous methods of dietary assessment, such as self-reported food diaries, are used.