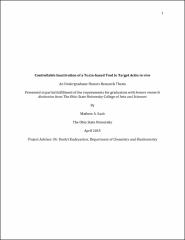 The actin crosslinking domain (ACD) is an effector domain of the larger MARTX toxins produced by the Gram-negative bacteria Aeromonas hydrophila, Vibrio cholerae, and Vibrio vulnificus. ACD, an actin specific toxin, catalyzes the covalent crosslinking of actin via formation of intermolecular isopeptide bonds between the K50 and E270 residues of actin monomers. The resulting actin oligomers vary in size and are non-polymerizable. It is a widely accepted theory that ACD toxicity stems from direct disruption of the actin cytoskeleton by depleting monomeric and filamentous actin pools, leading to the accumulation of non-polymerizable actin oligomers. Due to the high selectivity of ACD for actin, this toxin is an attractive candidate for developing a tool to study actin in vivo. However, a method to inactivate ACD inside the cell does not currently exist. One potential solution is to use UV-induced crosslinking proteins containing photo- sensitive amino acids. I hypothesize that substituting leucine residues in ACD with their photo-sensitive, artificial analog photo-leucine (photo-L) will allow for the recombinant expression of functional ACD that can be inactivated upon UV light exposure. This will be achieved by expressing ACD in the presence of photo-L. Future steps are to utilize the anthrax toxin translocation system (LFN domain and protective antigen) for delivery of the photo-controllable ACD to the cytoplasm of cultured cells where the ACD activity can be controlled by simple exposure of the cells to light. 4 Another potential solution is to modify ACD using a covalently bound photo- activatable crosslinker to produce ACD susceptible to UV-induced crosslinking. Benzophenone-4-maleimide (BPM) specifically and spontaneously attaches to thiol groups characteristic of cysteine residues and is a good candidate crosslinker for such an approach. Cys-mutantions must be introduced into ACD because the wild-type protein lacks sulfur- containing cysteine residues. To this end, ACD Cys-mutants were generated via multisite- directed mutagenesis in order to produce a library of His-tagged Cys-mutant LFNACDVc which were expressed in E. coli prior to being labeled with BPM. A convenient reporter for the ACD toxin activity is covalent crosslinking of actin, which can be visualized using SDS- gel electrophoresis as an accumulation of higher molecular weight products of actin crosslinking in the presence of active ACD. Preliminary results suggest that the introduced Cys-mutations affect the activity of ACD even in the absence of BPM-labeling. However, recent results reveal that newer sites targeted for Cys-mutation in ACD did not abolish the toxin's activity. With this achieved, the method should become a tool to allow on-demand ACD inactivation to further understand its pathogenicity and to study actin functions in vivo.

This work was supported by OSU start-up fund to Dr. Dmitri Kudryashov.