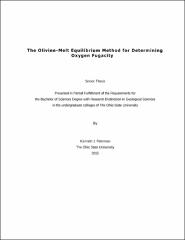 In order to connect volcanic rocks and their mantle sources, it is essential to consider redox equilibria and their dependence on temperature, pressure, composition, and oxygen fugacity. Oxygen fugacity plays a very important role in determining which minerals can crystallize and coexist in a rock, and therefore it is possible to determine the oxygen fugacity at which a particular rock equilibrates from chemical analyses of coexisting minerals and melt. The olivine-melt equilibrium method has been developed at The Ohio State University in order to calculate oxygen fugacity. First, the ferric to ferrous iron ratio of the melt must be determined. This ratio expresses the valence state of iron and hence the redox state of the magma. This ratio can be determined from the compositions of co-existing olivine and melt equilibrium pairs using the distribution coefficient describing the partitioning of magnesium and ferrous iron between olivine and liquid. The calculated ferric to ferrous iron ratios of the melt can then be used to calculate the oxygen fugacity at which the magma equilibrated. Hundreds of samples containing volcanic glass and coexisting olivine phenocrysts have been processed with the olivine-liquid equilibrium method for determining oxygen fugacity. The compositional data from these samples were retrieved from published research articles. The results for Iceland yielded average oxygen fugacities between 0 and -1 log unit below the Fayalite-Magnetite-Quartz (FMQ) buffer. The Mid-Atlantic Ridge gives an average of -1.6 log units below the FMQ buffer. The olivine-melt equilibrium method can be applied to many volcanic rocks from other tectonic environments in order to compare the redox state of magmas, global variations in magma and hence mantle redox states, and to determine how mantle redox states have varied through time.