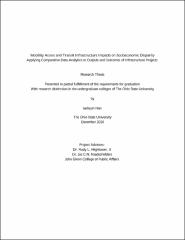 Mobility not only means freedom to move, but also increase in potentials and access to new opportunities. Humanity has migrated in both micro- and macro-scale throughout history for various reasons, but most notably for survival and pursuit of more livable life. As mobilization is an important factor for increased economic activities, advancing local travel capability of individuals has been stressed in the realm of public policy, as well as the necessity to resolve the issues involved. The relationship between public transit and poverty is proven to exist, but how to more effectively implement transportation network and infrastructure given such issue remains as an ongoing process. Meanwhile, the world continues to evolve and new technologies and initiatives emerge, so do problems. The ancient Silk Road and the recent China-led Belt and Road Initiative (BRI) illustrate humanity's never-ending quest for movement and development and consequentially have brought up many questions and concerns; some of them include if such development of transportation infrastructure will benefit populations disproportionately or indiscriminatory and if it will further escalate the socioeconomic disparity amongst the populations. Thus, the BRI-related transportation projects will likely add another dimension to the current issues regarding transportation and poverty if they fail to address the concerns appropriately. This research paper first focuses on the case of Columbus, Ohio by examining how its current transportation, especially as the city emphasizes the ongoing city-wide initiative called Smart Columbus, is serving its mission in improving the connection between the vulnerable population and more economic activities. Then, the countries that are involved in BRI are studies for a broader scope of comparative analysis. By analyzing the current status of the transit access for low-income populations as well as the predicted outcomes from the initiatives, this research aims to suggest some potential solutions that could be beneficial in improving the systems, but also in reducing the socioeconomic disparity, ultimately.