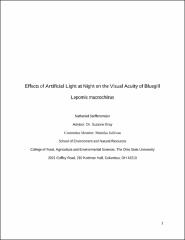 As worldwide human populations continue to increase and reside near aquatic environments, the impacts of such actions may become clearer. Artificial light at night is one way that humans have affected the natural environment. Bluegill (Lepomis macrochirus) are one of the most widespread species of fish throughout North America. This study tested the hypothesis that persistent artificial light at night affects the visual acuity of Bluegill. In order to test this, Bluegill were held under 4 different light treatments for approximately 3 months, which included high (15 lux), medium (8 lux), low (2 lux), and control (0 lux). Then, an experimental chamber was used to measure the reaction distance (i.e. maximum distance Bluegill could see the food) and latency (i.e. time to discover the food) of a Bluegill detecting freeze-dried shrimp under their respective light treatment. Two separate one-way ANOVA tests revealed no significant differences in reaction distance or latency when Bluegill were held under different light treatments. Ultimately, visual acuity of Bluegill was not significantly affected by artificial light at night under these intensities and spectral composition conditions.