An Adaptive Dynamic Model of a Vigilance Game in Group Foragers 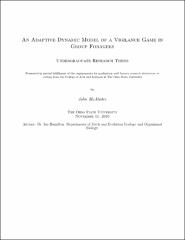 There is a well observed relationship between group size and time spent being vigilant in group foragers. The many eyes hypothesis supposes that individuals exhibit lower vigilance in larger groups because of the benefit they get from the vigilance of others. In the past, models which try to provide a mechanism in support of the many eyes hypothesis do not capture the way group size depends on vigilance, and some models depend on the idea that individuals perceive the strategies of all other group members, called "behavioral monitoring." Here I present a game theoretical model for vigilance using adaptive dynamics and pairwise invasion which captures this relationship, includes the way group size changes with vigilance and, removes the need for behavioral monitoring. By approximating a fitness function for an individual using a particular vigilance strategy in a group of size N, I can show when new strategies of vigilance will invade using pairwise invasion analysis. Using this analysis, I construct a dynamical system which describes the change in group size and vigilance as they relate to each other. By spanning the entire parameter space I show that at equilibrium, larger groups have far more limited maximum vigilance. Furthermore, by varying intraspecific competition I show an inverse relationship between group size and vigilance. Thus I provide a mechanism in support of the many eyes hypothesis from an evolutionary game theory perspective.