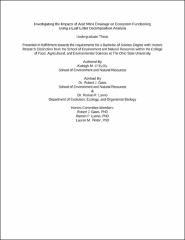 Acid mine drainage (AMD), a significant source of anthropogenic stress throughout the world, has relevant effects on carbon cycling. There are 1,300 miles of streams affected by AMD in Ohio alone. To investigate the impact of AMD on ecosystem function, multiple streams were surveyed at The Wilds Conservation Center in Cumberland, Ohio. The primary goal of this study is to quantify how AMD affects ecosystem process and function in benthic communities. Leaf litter bags were deployed across three separate stream sections. Two sites were chosen along Watson Road: one lower section with neutral pH (~7) and one upper section with low pH (~4). A third comparison site was selected at Miller Creek. Sixteen leaf litter bags were deployed at all sites in sets of three and subsequently collected once a month from October 2019 – February 2020. Water quality parameters (pH, temperature, dissolved oxygen (DO), conductivity) were recorded at the time of deployment. The leaf litter bags were retrieved and transported back to the lab and the percent of ash-free dry mass remaining after each collection day was determined. Leaf litter decomposition rates were slower in the Watson Upper site, which had more severe AMD pollution as compared to Lower Watson and Miller Creek. Other published studies suggest that marked decreases in decomposition rates are a result of AMD's effect on water chemistry. Subsequently, this has adverse effects on the biodiversity of both macroinvertebrate and microbial communities in those areas. Benthic communities are critical to the processing of organic carbon, an important component of the carbon cycle and global carbon budget. Results from this study will provide knowledge that is to be used in future remediation efforts by The Wilds. Knowing which rates of organic matter decomposition correspond to desired community functioning can help create benchmark levels for the successful management of AMD remediation sites.