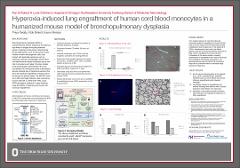 Background: Bronchopulmonary dysplasia (BPD) is most often characterized by chronic lung injury secondary to high levels of oxygen during the neonatal period. Properties of the preterm infant during the perinatal period, such as the presence and function of stem and progenitor cells, may interact with postnatal exposures such as hyperoxia. Alveolar macrophages derived from cord blood-derived (fetal) monocytes play a vital role in lung injury and repair. Previous studies have demonstrated administration of human cord blood (CB) monocytes results in decreased alveolar damage due to hyperoxia exposure but fail to demonstrate engraftment of these cells in the lung of the animal model. The MISTRG mice are IL2RG and Rag2 deficient while expressing human GM-CSF, IL-3/GM-CSF, TPO, and a SIPRα transgene, making it a useful model to study the effects of hyperoxia and human CB monocyte engraftment. Hypothesis: Administration of human cord blood monocytes in MISTRG humanized mice ameliorate the BPD-like phenotype after exposure to hyperoxia. Methods: Cord blood from births at Prentice Women's Hospital were used and collected as part of the NU Cord Biorepository. Written informed consent was obtained from all participants and the study was approved by the IRB (STU#00201858). Human CB was collected after delivery and processed within 36 hours. Monocytes and CD34+ cells were isolated by magnetic-activated cell sorting (MACS). Intra-hepatic injections of sorted monocytes, isolated CD34+ cells, and PBS (sham) were performed at Day 0-1 of life, and pups were exposed to normoxia (21% oxygen) or hyperoxia (85%) for 7 days. Lungs and livers were harvested and H&E staining and immunohistochemistry for human CD45 was performed. Alveolar count and area were measured in addition to quantifying human CD45 expression in the lung and liver. Results: No evidence of human cell engraftment was discovered when administering CB cells by retro-orbital injection or intranasal instillation. Immunohistochemistry confirmed human CD45 expression in both the liver and lung after intra-hepatic injection of CB cells. Presence of human CD45+ cells in the liver was more pronounced with CB monocytes versus CD34+ cells, both administered separately by intra-hepatic injection. Presence of these human cells in the liver was more pronounced in mice exposed to hyperoxia than those maintained at normoxia (P<0.01). Engraftment of human CD45 cells was demonstrated in lungs of mice injected with pooled samples containing both monocytes and CD34+ cells, and in mice injected with sorted monocytes, but not in mice treated with isolated CD34+ cellular injections. Preliminarily, human CD45 positively-stained cells appeared more prominent with hyperoxia exposure, but quantification of cells in the lung is pending and confirmation with immunofluorescent staining is pending. Also preliminarily, lung histology revealed a trend towards increased alveolar number and decreased alveolar area in mice injected with sorted CB monocytes versus isolated CD34+ cells before exposure to hyperoxia. Conclusion: Intra-hepatic delivery of cord blood-derived monocytes leads to engraftment of human CD45+ cells in murine lungs, and may attenuate alveolar simplification due to hyperoxia. In the absence of CD34+ hematopoietic stem cells, the effects appear to be due to monocyte delivery from liver to lung, which is facilitated by human GM-CSF. Completion of the above studies, including quantification of engrafted human cells in the lungs and correlation with alveolar parameters, will demonstrate the extent to which CB monocytes may have a protective effect on neonatal lungs exposed to hyperoxia.