Development of Proteolysis Targeting Chimeras as a Target for Hepatocellular Carcinoma 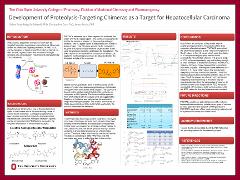 Proteasomes are novel targets for cancer treatments and can be used for targeted protein degradation. Proteolysis-Targeting Chimeras, or PROTACs, contain a region that binds to a target protein linked to a hydrophobic tag which binds to E3 ligase. PROTACs are designed to degrade specific proteins of interest by binding to the target protein, resulting in poly-ubiquitination and flagging of the protein for degradation. Hepatocellular carcinoma is one of the most common types of liver cancers in adults and is the third leading cause of cancer death in the world. Androgen receptors have been studied as potential targets for the treatment of hepatocellular carcinoma. Studies have shown that AR agonists can be incorporated into PROTACs to recruit the receptor for degradation. Proteasome inhibitors can also be used in the treatment of cancer, but they cause an accumulation of pro-apoptotic proteins which leads to cell death, rather than causing the degradation of proteins. These molecules were studied when designing PROTACs as a different mechanism to target the proteasome. PROTACs can be synthesized using CLICK chemistry, which is a method that can be used for conjugation reactions to rapidly create these chimeras while generating byproducts that can be easily removed. Research indicates that changes to the linker region and the linker attachment site of the PROTAC can affect the biological activity of these molecules. A review of the current literature on PROTAC development has aided in the design of novel degraders. The application of these design principles will be discussed for a variety of androgen receptor agonists.