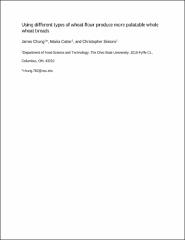 Despite the recommendations listed in the Dietary Guidelines for Americans, the average consumption of whole grains in the United States is vastly insufficient. Inadequate consumption of whole grains in favor of refined grains is associated with an increased risk of developing a wide variety of diseases including cancer, diabetes, and cardiovascular disease. Breads serve as a staple grain source across American households, but a primary barrier to the consumption of whole wheat breads is their increased bitterness in comparison to breads made from refined wheat. The objective of this study was to assess if consumer liking scores differed across breads made using 11 different whole wheat flours, and if the most liked sample also produced the highest proportion of just-about-right (JAR) intensity ratings. When liking scores were compared via a two-way ANOVA and an LSD post-hoc test (α = 0.05), it was found that every bread type differed significantly from at least three of the other varieties. Descriptive statistics revealed the Vida flour type produced the most liked bread with an average liking score of 5.595 ± 0.134 (out of a total possible rating of 9), and the JAR intensity data agreed with this: the Vida sample had the highest percent of JAR ratings at 77.3% when averaged across aroma, flavor, color, and texture. Regression analyses furthered this, showing that percent JAR ratings for aroma, flavor and texture were positively correlated with increased sample liking (R2 of 0.3438, 0.7928, and 0.4857 respectively), but less so for color (R2 of 0.1423). The results presented in the study may assist product development efforts towards more palatable whole wheat breads, which in turn may encourage more widespread consumption amongst American consumers.