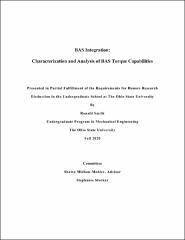 Hybridizing a vehicle can lead to significant increases in the fuel economy and the performance of a vehicle. One hybrid component that can be integrated into a vehicle is a belted alternator starter (BAS). This component is mounted to the engine and belted to the front-end accessories drive (FEAD). One important consideration when integrating the BAS is the torque capabilities of the system. One specific example of a torque capability being investigated is the range can the BAS operate without experiencing belt slip. The goal of this research was to create a mounting solution for the BAS system to fit within a 2019 Chevy Blazer as a part of the EcoCAR competition. The BAS mount was designed using a combination of NX modeling software and physical measurements. After integrating the BAS, testing could commence. The vehicle was placed on a lightweight chassis dynamometer and various tests were run on the BAS to collect data that would allow for insight into the torque capabilities of the BAS system. The minimum amount of BAS torque needed to initiate engine acceleration from idle speed with the vehicle in drive was found to be 15 Nm. The minimum torque necessary to start the engine was found to be 17.3 Nm. With regards to the belt slip, the speed ratio parameter named was defined to help establish a relationship between the engine and BAS with regards to the FEAD belt. A baseline value was set from experimental data and then compared to the tests ran to look for deviations which would indicate belt slip. As a motor, the BAS experienced belt slip when subjected to 15+ Nm decreases in torque command. The BAS also experienced belt slip when attempting to start the engine. As a generator, the BAS experienced belt slip more commonly. At low vehicle speeds, torque demands combined with driver acceleration caused severe belt slip while at higher vehicle speeds, the BAS experienced significant belt slip at torque demands over 20 Nm.