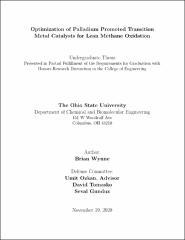 The substantial increase in greenhouse gases in the atmosphere has been linked to global warming. Although carbon dioxide (CO2) has the largest contribution to the increase in the Earth's temperature, methane (CH4) has a global warming potential (GWP) that is 25 times that of CO2 and must be regulated as well due to this significant impact. This issue is exemplified by fugitive methane emissions from coal mining, which have a considerable contribution to anthropogenic methane emissions in the United States. In this study, a stable and economical system was investigated for catalytic CH4 mitigation with a state-of-the-art catalyst for the complete combustion of methane. Palladium (Pd)-based supported catalysts show high activity for the methane oxidation reaction but are very sensitive to the poisonous effect of water vapor. This sensitivity is problematic as water vapor is a product of the methane oxidation reaction and is present in the coal-mine ventilation air along with methane. A cobalt (Co)-based system was proposed as an alternative to the Pd-based catalysts, to avoid this water vapor sensitivity. The characterization technique of X-Ray diffraction (XRD) and temperature-programmed reduction (TPR) were utilized for determining the physical and chemical properties of the resulting Co-based catalysts. Methane oxidation activity tests were performed on the synthesized Pd-based and Co-based catalysts, both in the presence and absence of water vapor. These characterization and activity tests demonstrated that despite the higher light-off temperatures of Co-based catalysts compared to Pd-based catalysts, the Co-based catalysts were significantly more resistant to the poisonous effect of water vapor. This resistance was maintained for levels of water vapor present in a typical ventilation air methane (VAM) stream as well as that produced during the oxidation reaction. Comparatively, Pd-based catalysts suffered from lower activity in the presence of water vapor due to the formation of the non-active Pd-OH phase. Therefore, the Co-based catalysts are a well-founded alternative as they did not display deactivation due to the presence of H2O in the reaction medium, and still allowed for methane combustion.

OCRC Agreement Number: R-17-14 This project was funded in part by the Ohio Coal Development Office of the state of Ohio.