When Aid Replaces Ideology: Corruption as a Hegemonic Device in Post-Taliban Afghanistan 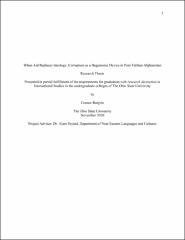 For the last two decades, Afghanistan has consistently been listed among the world's most corrupt nations in Transparency International's Corruption Perceptions Index. While many efforts have been made to discover how corruption might be reduced, the more foundational question of why corruption is so persistent has been pursued far less thoroughly. This discourse has been dominated by two generalized views of corruption: the first of these views hold that corruption is the result of immutable cultural inferiorities; the second view holds that corruption is the result of bad actors who, through their avarice, disrupt an otherwise impartial government. I transcend these reductionist views by placing Afghan corruption within its proper historical and politico-economic context. I argue that corruption is a hegemonic device that has been increasingly necessitated by the contradictions the U.S. invasion has thrust upon the nationally-unifying ideology of the past. I then analyze the nature of political corruption and administrative corruption from within that framework.