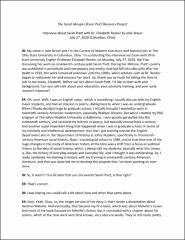 Interview with Dr. Elizabeth Renker about her work on nineteenth-century poet Sarah Piatt. During her lifetime, Piatt’s poetry was published in periodicals and newspapers and widely read but fell into obscurity after her death in 1919. Her work remained unknown until the 1990s, when scholars such as Dr. Renker began to rediscover her and reassess her work. Interview conducted in in Columbus, Ohio, by Jolie Braun, Curator of Modern Literature and Manuscripts at The Ohio State University.