Breaking and Remaking Scripture: The Life, Death, and Afterlife of the Hornby-Cockerell Bible 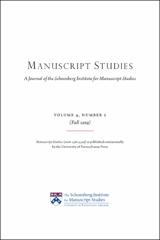 This article examines the now fragmented early-13th century Hornby-Cockerell Bible from a variety of perspectives, including an overview of its known provenance history as a complete codex between 1880 and 1981, it's subsequent breaking for profit and dispersal of its leaves around the world, and the specific--and peculiar--motivations behind the codex's destruction. The essay also includes an analysis of the manuscript within the larger context of Bible production and use in the early-13th century, including an examination of its textual content and organization, its illuminated contents, and direct evidence of medieval reader activity preserved in marginal notes, nota bene marks, and doodles. Altogether, the article explores how Scripture, as presented and expressed in this particular manuscript, has been repackaged and revalued throughout history, from its creation as a usable medieval text, to its conversion into individual, single-folio units for sale, and its gradual reaggregation and recognition as a rare and dynamic witness to the complex evolution of the Bible in the Middle Ages. Also included is an appendix recording the textual and illuminated content, current location, and individual provenance histories of the 235 (of 440) surviving leaves the author has located or traced.

Publisher does not allow open access until after publication