Violence against women of Belize in rural communities 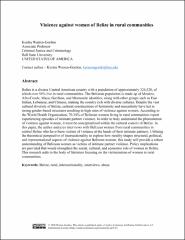 Belize is a diverse Central American country with a population of approximately 324,528, of which over 54% live in rural communities. The Belizean population is made up of Mestizo, Afro-Creole, Maya, Garifuna, and Mennonite identities, along with other groups such as East Indian, Lebanese, and Chinese, making the country rich with diverse cultures. Despite the vast cultural diversity of Belize, cultural constructions of femininity and masculinity have led to strong gender-based structures resulting in high rates of violence against women. According to the World Health Organization, 70.34% of Belizean women living in rural communities report experiencing episodes of intimate partner violence. In order to truly understand the phenomenon of violence against women, it must be conceptualized within the cultural context of Belize. In this paper, the author analyzes interviews with Belizean women from rural communities in central Belize who have been victims of violence at the hands of their intimate partners. Utilizing the theoretical perspective of intersectionality to explore how rurality shapes structural, political, and representational aspects of violence against Belizean women, this study will provide a robust understanding of Belizean women as victims of intimate partner violence. Policy implications are provided that would strengthen the social, cultural, and economic role of women in Belize. This research adds to the body of literature focusing on the victimization of women in rural communities.