#MeToo in regional, rural and remote Australia: An analysis of regional newspapers reports profiling the movement 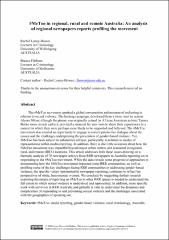 The #MeToo movement sparked a global conversation and moment of reckoning in relation to sexual violence. The hashtag campaign, developed from a tweet sent by actress Alyssa Milano (though the phrase was originally coined by African American activist Tarana Burke some decade earlier), provided a moment for survivors to share their experiences in a context in which they were perhaps more likely to be supported and believed. The #MeToo movement also created an opportunity to engage in a more productive dialogue about the causes and the challenges underpinning the prevention of gender-based violence. Yet, #MeToo has been subject to substantive critique, particularly in relation to modes of representation within media reporting. In addition, there is also little is known about how the #MeToo movement was impactful beyond major urban centres and resonated in regional, rural, and remote (RRR) locations. This article addresses both these issues drawing on a thematic analysis of 70 newspaper articles from RRR newspapers in Australia reporting on or responding to the #MeToo movement. While the data reveals some progressive approaches to documenting how the #MeToo movement impacted some RRR communities, as well as profiling some of the key challenges facing RRR communities in addressing gender-based violence, the specific voices represented in newspaper reporting, continues to reflect the perspectives of white, heterosexual women. We conclude by suggesting further research exploring the nature of reporting on #MeToo in other RRR spaces is needed to understand the full extent to which sexual violence is understood and represented. In addition, more specific work with survivors in RRR Australia and globally is vital to understand the dynamics and complexities of responding to and preventing sexual violence and the challenges associated with the geographies of speaking out.