When in Illyria: Relative Temporality, Gender, and Sexuality in Twelfth Night 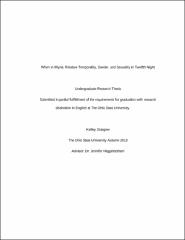 This paper investigates how complicated early modern conceptions of time and temporality are explored in Shakespeare's Twelfth Night, through the lens of its various homoerotic relationships. Illyria, the setting of Twelfth Night, facilitates a relative time where characters can explore latent homoerotic desires, as well as the desire to perform different genders, such as in the case of Viola/Cesario. But even as the characters utilize this relative time, they are acutely aware of how it will return to its regulatory function as the play ends and several heterosexual matches are completed. Time and gender/sexuality are interconnected throughout Twelfth Night and reveal nuanced early modern views of both concepts.