Elite Ethnic Koreans in Japanese-Dominated Manchukuo: A Case Study Based on the Thomas Gregory Song Papers 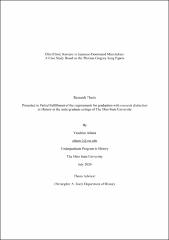 Thomas Gregory Song (1929-2014) and his family lived in Japanese-dominated Manchukuo (1932-1945) from 1934 to 1946. Records of the Song family's life there offer great insight into the activities of elite Koreans (as defined by education, occupation, and socioeconomic status) in the Japanese empire. This thesis, which gathers evidence from Ohio State's Thomas Gregory Song Papers and from secondary historical works, argues that the Song family's experience illustrates a process of simultaneous collaboration with and resistance to the Japanese occupation. The thesis is organized into two parts. Part one introduces the life path of Thomas Song and his immediate family from the Joseon dynasty (1392-1910) on down through Thomas Song's emigration to the United States. In part two, the thesis examines the ways in which Song and his parents interacted with the Japanese empire (1868-1945) and how the Songs simultaneously collaborated with and resisted Japan's occupation of Manchuria.