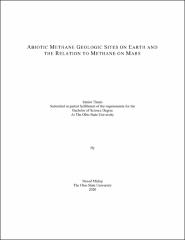 Methane was detected on Mars in 2003 and its discovery sparked renewed interest in potential microbe existence on the red planet. This thesis examines whether the detected methane is likely to be biologically or geologically related. First, since methane is produced through the reduction of carbon molecules, the various biotic and abiotic methods that carbon is reduced are outlined. Biological methods of the production of methane include methanogenesis and metagenesis, while the geological processes involve magmatic and gas-water-rock reactions. Second, two geologic sites on Earth where abiotic methane was discovered are analyzed: Chimaera, Turkey and Orthys, Greece. Both locations have ophiolite outcrops that are conducive to serpentinization reactions. Thirdly, Mars' terrain is analyzed and compared to the geologic sites on Earth to determine similarities. It was found that regions where methane was detected on Mars are comparable to abiotic sites on Earth as they contain ferromagnesian minerals closely associated with serpentinization. Therefore, it is highly probable that the methane detected in Mars' atmosphere is from an abiotic source. However, there is not enough information known to rule out the involvement of microbes on Mars as isotopic classification of methane and noble gasses on Mars have not been determined.