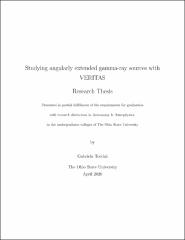 The Very Energetic Radiation Imaging Telescope Array System (VERITAS) observes astronomical sources emitting gamma-rays in the energy range from 85 GeV to 30 TeV. VERITAS can detect a point-like source with 1% of the Crab Nebula flux in a 25-hour long exposure. During the past decade, VERITAS has observed the Geminga supernova remnant for 93 hours. Although Geminga has 23% of the Crab Nebula flux, it has not been successfully imaged yet due to its large spatial extent. Telescopes from the Milagro Experiment have detected Geminga with an angular diameter of 2.6°, which occupies over 5 times more space in the sky than the moon (Abdo et al. 2009). Currently, two standard methods are used to subtract the cosmic-ray background from images of a gamma-ray source. To estimate the background, these methods compare the source to surrounding areas within the telescope's field of view (FOV). However, these methods do not work for spatially extended sources like Geminga, where the region of interest (ROI) is comparable in size to the FOV. The Matched Run Method (MRM) was developed to allow for comparison between the ROI and other regions of the sky. The MRM algorithm estimates the background by matching observations from different sources with similar characteristics. I optimized the algorithm by studying how parameters such as gamma-ray shower shape, elevation, azimuth, and season affected the success of matches. The improved version of the MRM will enable VERITAS to accurately image spatially extended sources.

Except where otherwise noted, this item's license is described as Attribution-NonCommercial-ShareAlike 4.0 International