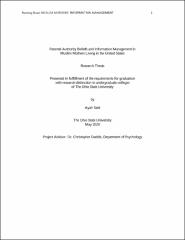 Using the lens of the social domain theory, the present study examined Muslim mothers' beliefs about authority and information management regarding their middle- and high school-aged children growing up in the United States in a sample of 99 Muslim Mothers (Mage = 41.26, SD= 5.87). Consistent with hypotheses, mothers believed that they had a right to know most about religiously conventional, conventional, and moral issues more than they did about other types of issues. It was also found that right to know beliefs predicted maternal knowledge about child activities; analyses further revealed that setting explicit rules partially mediated this association. Next, maternal solicitation and voluntary child disclosure were both positively associated with maternal knowledge. Gender comparisons revealed that mothers obtained knowledge about their sons through parental solicitation and about their daughters through child disclosure. This study specifically contributed to the literature using a vastly understudied sample, not only in the information literature, but also in the greater developmental psychology literature.