The association of sexual orientation with allostatic load and cardiovascular health: An analysis of the National Health and Nutrition Examination Survey (NHANES) 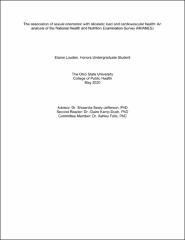 Background: Cardiovascular disease (CVD) is an important health problem among sexual minorities given increased stress, according to minority stress theory. Allostatic load (AL), a measure of chronic wear and tear on the body's systems physiological regulation, may be higher among sexual minorities, who also exhibit increased risk factors for cardiovascular disease. We examined the relationship between AL and cardiovascular health (CVH) according to sexual orientation. Methods: We used data from the National Health and Nutrition Examination Survey (NHANES) 2001-2008 cycles to examine the relationship between sexual orientation, AL, and CVH. We categorized participants as straight/heterosexual, gay/lesbian, bisexual, or homosexually experienced, according to their sexual orientation. AL was defined based on ten biomarkers and CVH was quantified using the American Heart Association's (AHA) Life's Simple 7 ideal health score in addition to the use of self-reported medical diagnoses. Logistic regressions were used to estimate odds ratios and 95% CIs for associations between sexual orientation and AL, CVH, and self-reported CVD. Results: Sexual identity was not associated with AL or self-reported CVD among the population included in the analysis but was significantly associated with worse American Heart Association Simple 7 CVH scores among sexual minority females. Conclusion: Sexual minority females have elevated CVD risk factors, yet do not have increased rates of CVD diagnoses, which is not fully understood. The findings indicate the importance of continued research of health behaviors, biomarkers, and sociocultural stressors among sexual minority individuals. More research is needed to fully illuminate the mechanism between sexual minority status and the development of chronic disease.