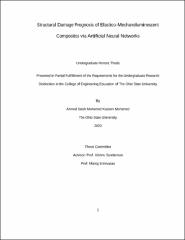 In a world foreseeing the commerciality of autonomous vehicles in the forthcoming years, a need for a reliable structural damage prognosis (SDP) method that actively monitors the health of the entire system's components is imperative. In this paper, an Artificial Neural Network (ANN)-based SDP algorithm is constructed by correlating a sample's luminescence data, acquired from mechanically testing six mechanoluminescent coupons, to its structural age. This underlying relationship between light intensity and structural age is developed in the frequency domain by performing the Short-time Fourier Transform (STFT) on the measured light intensity data. The obtained STFT spectrogram, a function of frequency and structural age, encodes vital information regarding structural life in the form of time-varying amplitudes at various constitutive frequencies, transforming the SDP problem to a classification problem solvable by an ANN. The ANN algorithm was trained and tested yielding high accuracies in predicting age in real-time for the training phase, yet poor results for the testing phase due to inter-sample variation and, hence, possible decision-boundary overfitting. Accompanied by the success of this algorithm is the enablement of condition-based maintenance compared to planned maintenance for composite structures in various applications, reducing unnecessary machine downtime as well as avoiding unforeseen catastrophic failure.