The effects of water clarity on cichlid fish reproductive behavior 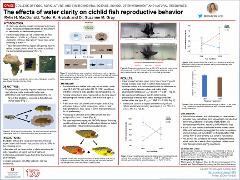 Humans are altering aquatic ecosystems in many ways, and one of our greatest influences is increasing turbidity, or the amount of sediments, in freshwater systems. Increasing cloudiness of the water can be problematic for fish like African cichlids, (e.g. Pseudocrenilabrus multicolor victoriae), that rely on visual cues when choosing a mate. The objective of this study was to determine if turbidity impacts the reproductive behavior, specifically female mate choice, of these fish. If turbidity affects the visual environment, then we expect that male and female mating behavior will also be impacted. To test this, we examined mate choice behavior of females reared in clear vs. turbid water. We predicted that regardless of rearing treatment, females will prefer males reared in the same condition. We used a dichotomous choice test to test the impact of increased turbidity on the mating behavior of P. multicolor. The experimental tanks isolated a clear-reared and turbid-reared male on opposite ends, with a female in the center. Each female was tested with the same pair of males under both clear (0-0.5 NTU) and turbid (10-15 NTU) conditions, with trial order and male position randomized. Fish were acclimated overnight, with opaque barriers between compartments to prevent the fish from seeing each other. The barriers were then removed and behavior video-recorded for 30 min. Female interactions were measured as the time spent interacting with males (i.e. within 12 cm of male). Clear-reared females spent on average (± s.d.)18 min (±7) interacting with males during clear trials, and 13 min (±8) during turbid trials. Turbid females spent 14 min (±6) interacting with males during clear and 15 min (±8) during turbid trials. Further analyses will test if females spent more time with one male, indicating her preference. Clear-reared females spent more time interacting with males in clear trials than in turbid trials; however, females reared in turbid water showed no difference in mating activity between clear and turbid trials. Fish not accustomed to turbid water may spend less time engaging in reproductive behaviors, potentially indicating that turbidity will decrease reproduction, resulting biodiversity loss.