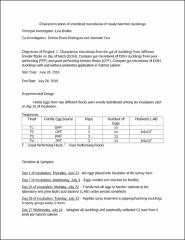 Commercial hatcheries have become automated to increase production and minimize disease in poultry. Because of the limited contact with hens' microbiota, assembly of the intestinal microbiome in newly hatched birds is predominantly influenced by the hatchery environment. Pioneer colonization of the gastrointestinal tract (GIT) is critical and serves as the foundation and primary influence for later development of the microbiota. Hatchers contaminated by intestinal pathogens can result in neonatal disease and poor performance, but studies have shown applied probiotics can be used to beneficially modulate early GIT colonization. Probiotic species, such as lactic acid bacteria (LAB), have been widely reported to drive high performance and immune system development in poultry. The study presented here compared the gut microbiota of day of hatch (DOH) ducklings from two breeder flocks, poor-performing (PP) and good-performing (GP), consisting of control (PPC & GPC) and those treated with a LAB-based probiotic (PPT & GPT). Eggs were placed into individual hatchers based on parent flock and treatment. After 40% of eggs pipped, probiotic inoculum was sprayed into hatchers every 4h for a total of five times. At hatch, whole GIT were collected and plated on selective agars for bacterial enumeration and statistical differences were determined using Student's t-test. Recovery of Gram-negative bacteria was similar among controls but was significantly lower (p<0.001) in PPT compared to GPT, and a significant reduction was found for PPT vs PPC (p<0.001) but not GPT vs GPC. Additionally, a higher population (p<0.05) of LAB was found in PPT and GPT compared to controls. Pioneer colonization serves as the basis for which further colonies will settle and drives the course of composition and diversity over time. The results suggest that early application of probiotics play a critical role in manipulation of pioneer colonizing bacteria, with potential benefits to the immune system. Probiotic application may also decrease potential pathogenic Gram-negative bacteria, such as E. coli. The data also suggests maternal flock may play a role in initial bacterial colonization at DOH.