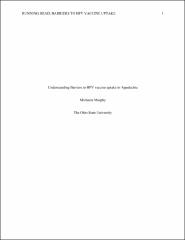 Every year in seven small counties of Ohio seventy-six people lose their lives to a completely preventable Human Papillomavirus-related cancer. These counties are not random, nor are they an anomaly. All seven are considered to be within the Appalachian region of the United States, which, despite holding a little less than one-tenth of the total population, has the highest cancer mortality rates in the country. The term Appalachia describes the counties surrounding the Appalachian mountain range in the eastern United States. Here, rates of Human Papillomavirus (HPV), vaccine uptake are lower than in other areas of the United States. This study seeks to examine, using the 5 A's of Healthcare Access framework (Affordability, Accessibility, Accommodation, Acceptability, and finally Availability) why, despite there being a viable vaccine, rates of uptake remain low using the seven aforementioned counties as a sample. In using a mixed methods approach, the study integrates existing research from major public databases with the direct input of medical professionals gathered via survey. The professionals were asked for their opinion on the impact each of the Five A's of Healthcare Access have on their patients, using data from 2018-19. Through analyzing their answers, as well as related research, the study hopes to provide important information on HPV-vaccine barriers for further programs to use in order to lower the number of preventable deaths.