How Firm Thy Friendship 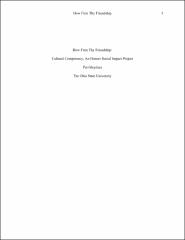 The National Association of Social Workers (2015) frames cultural competency as an individual and systemic response of respect toward any and all identities and acknowledges the worth in any and all identities. Cultural competency is a vital skill on today's increasingly diverse college campuses. Information from 2017 reported by the Federal Bureau of Investigation (FBI) shows 280 hate crimes were committed on college campuses across the United States, an uptick from 2016, and a large increase from 2015 data (Bauman, 2018). It is also important to note this data is limited to only participating universities. The Anti Defamation League (2018) reported that in the 2017-2018 academic year, there were 292 reported cases of white supremacist propaganda plastered across the nation's campuses. Beyond extreme instances of hate, students of many identities on campuses across the nation face microaggressions from peers, faculty, and staff. McCabe (2009) details how people of color and white women experience microaggressions on campus, which although different in sentiment are similar in their effects on students and the way they respond to the microaggressions. This project explores conducting a cultural competency education workshop to teach first year undergraduates vital skills to navigate campus and reduce negative cultural outcomes.