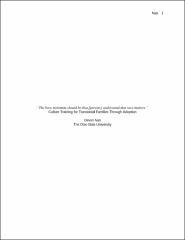 Transracial adoptions occur when parents adopt a child of a different race or ethnicity. Previous studies show that teaching transracially adopted youth about their birth culture is linked to higher self-esteem and a stronger sense of belongingness. However, these studies lack research about the type of preparation and training needed to prepare parents of obtaining those characteristics in their adopted child's life.This study used focus groups and one-on-one interviews to gain an understanding of the types of culture training parents received during and after adoption. Parents were asked to share their perspectives on culture trainings and its impact on raising children of a different race/ethnicity. Adopted youth were asked to describe how parents framed conversations about race/ethnicity and its impact on their relationship with parents. All participants had to complete a sign-in survey to obtain non-identifying information including participants' ages, race/ethnicity and year of adoption before beginning a focus group or interview. All focus groups and interviews were audio recorded using a digital audio recorder then transcribed by using the voice tool on Google Drive. The transcriptions were categorized according to emerging themes, using a single adjective or phrase. In this study, it was found that adoptees want parents to understand the possible challenges that can arise while raising a child of another race, parents should be able to have open discussions about the adoption as well as be able to appropriately talk about race and culture. It was found that parents who have adopted transracially since 2015, are more aware of the supports adopted children need; parents are constantly learning about culture and how to include the culture in the adoptees' lives. This study was able to incorporate perspectives from transracial adoptive parents and transracial adoptees in order to explore the needs of a transracial adoption.