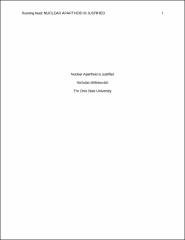 Nuclear apartheid is the condition of great powers maintaining nuclear arsenals while prohibiting other states from building similar weapons. Some have argued that nuclear apartheid is an unjust arrangement because of its inherent inequality and discrimination. I argue that because of the role differentiation between great powers and minor powers, nuclear weapons in the hands of great powers actually produce a more stable international system than either alternative of mass nuclear proliferation or total disarmament and on this basis find it normatively superior.